Ford Mustang – The Origin of an Icon

The car we know today as an icon of automotive history actually started its successful run in a very unconventional way back in the early 1960s.

Sometime in 1961, Lee Iacocca, vice president and general manager of the Ford Division, had a vague idea for a practical expansion of the Ford model line. He thought of a four-seater with individual seats in the front, a bench seat in the back, and a gear box that would be mounted directly on the floor pan. In addition, the new vehicle would be no longer than 180 inches and no heavier than 2500 pounds. Lastly, it should cost less than $2500 so that it would be affordable for almost everyone. So far, so good… 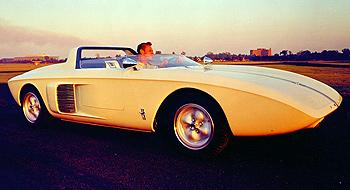 On the one hand, this idea was relatively bold because there had never been such a sporty compact vehicle in this form with seating for four and a price that was still affordable. But on the other hand, this idea was based on Lee Iacocca’s unusually good feel for the market and simple logic.

Iacocca knew that it would not take long until the Baby Boomer generation would represent a significant customer base. And what would appeal better to this group than a vehicle with the features mentioned above?
It was perfect for a small family, with Mom and Dad sitting in the front and room for both children in the back seat, even though it was supposed to be a type of sports car.

The promising motto “The car to be designed by you” added to the appeal. The vehicle was to be offered in a basic version that included the most important features but was otherwise somewhat spartan. In return, there would be a very extensive list of options. This way everyone could make their own individual Mustang. Regardless of whether sporty, efficient, luxurious or purist, there would be something for everyone.

At this point in time no one could have possibly anticipated that the Mustang would win countless awards and make an impact on the American automobile market like no other model before or since.

After many meetings, market research surveys, and the production of various prototypes, the Mustang project, also referred to as the “T-5 Program”, was finally approved on September 10, 1962. The Mustang II prototypes designed by the Ford design studio under the leadership of Joe Oros, Gale Halderman an L. David Ash were agreed upon.

Many components from the Ford Falcon were used in the new vehicle. This allowed production costs to be kept as low as possible, and the goal of selling the car at an economical price was met as a result.

The production preparations were put into motion, and after a record time of just 18 months, the first series Mustang came off the line on March 9, 1964.

Six weeks later, on April 17, 1964, the Mustang was presented to the public at the World’s Fair in Flushing Meadows, New York. At the same time, sales were launched at American dealers with sales figures that are unparalleled, even today.

In the six weeks of production before the start of sales, Ford built 16,000 units. To the surprise of everyone, 22,000 Mustangs were delivered on the first day, thanks not just to the attractiveness to new families but also to the clever marketing strategy. As part of the strategy, Ford had given numerous presentations in the weeks before the market launch, and on the day before the start of sales they had placed advertising spots on all three main channels (ABC, NBC, and CBS).

Interestingly, an export version of the Mustang was also sold in the European market because the initial design had been very well received here.
The first vehicle was sold to a customer in England on April 8, 1964, even before the US market launch.

For reasons that today are no longer clear, Ford rejected this offer and focused on the project name used at that time, “T-5”. The Mustang was only sold in Germany with this name, which makes it a true rarity today.


On the following pages, we have put together a summary for you with all the important details, including technical data, the colors available at that time, and the original Mustang brochure. This overview will be continually expanded and should serve as a reference guide for all technical questions pertaining to the first model series of the Ford Mustang.